A Shift in Care: Protecting Access to Medicare Act

A Shift in Care: Protecting Access to Medicare Act

The Protecting Access to Medicare Act (PAMA), like a lot of legislation, is based on a noble intention and is full of trade-offs, benefits and drawbacks. Overall, the Act aims to move the health care industry toward one that pays for results as opposed to services. Getting there, of course, is the tricky part.

Since the PAMA was signed into law on April 1, 2014, it has been a source of conversation among health care providers, lenders and beneficiaries. While there are many important components to this multifaceted legislation, this article will focus on the key components pertinent to senior living and health care providers. Perhaps most noteworthy for providers is the introduction of a value-based payment system for skilled nursing facilities (SNFs) that is based on individual SNF performance on a hospital readmission measure.

In the spirit of transparency and clarity, the goal of PAMA is to further define the terms, expectations and limitations of the Medicare Act pertaining to Medicare providers, beneficiaries and legislative branches. When it was signed into law in 2014, one of the key provisions was a delay in any cuts in the Medicare reimbursement rate until 2015. These cuts were originally scheduled to go into effect April 1, 2014, and have traditionally been delayed each year for more than a decade. This time, the cuts went into effect with no legislation in sight to change that. Many groups, such as the American Medical Association (AMA), were disappointed in this aspect of PAMA and continue to push for a permanent fix to the Medicare cuts. It remains to be seen whether those efforts will prove to be fruitful. For now, PAMA is garnering attention not for the highly discussed Medicare cuts, rather for other provisions that are beginning implementation. 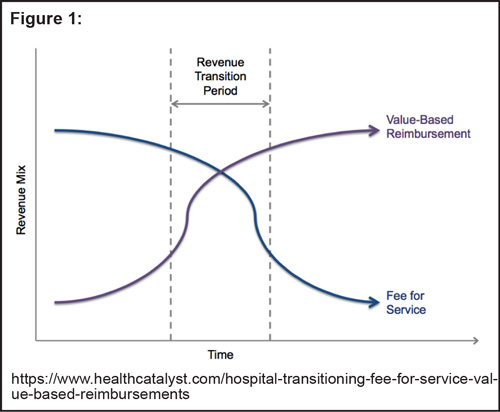 One of the core sections to come from the PAMA is section 215 which discusses the shift to a value-based purchasing (VBP) system. VBP is a demand side strategy to measure, report and reward excellence in healthcare delivery.   The transition to a VBP system typically occurs over many years with a transition period during which revenue decreases (Figure 1).

Beginning on Oct. 1, 2018, Medicare reimbursement for SNFs will be tied to performance and quality of care rather than the traditional “fee-for-service” model. The VBP program looks at one quality measure defined by Health and Human Services (HHS) to determine the Medicare reimbursement that the facility will receive. High performers will receive incentive payments and low performers will be subject to penalties.

In order to create the incentive pool, SNF’s Medicare per-diem payments will be reduced by 2%. Out of the money collected, 50-70% of it will be available for the incentive pool. Not all of the 2% reduction is going back to SNFs, as it is also a means to save Medicare money, a projected $2 billion over 10 years. Top performing SNFs will see most, if not all, of their 2% withhold returned through incentive payments, and possibly more. SNFs that perform in the middle level are expected to see a portion of their 2% withhold returned, while bottom performers will receive less than their withholding or nothing.

To quantify a SNF’s performance in the VBP program, HHS will use one of two quality measures: a hospital readmissions measure based of all causes and conditions, or a “resource use” measure of “all-condition risk adjusted potentially preventable hospital readmissions” for SNFs. Initially, the VBP performance will be measured using the all-encompassing readmission measure, however, the PAMA requires that the more specific “resource use” measure be implemented as soon as possible.

HHS will provide SNFs with confidential feedback on the initial results from both measures in 2016 and will publicly report data on both measures by Oct. 1, 2017. The proposed VBP rule will be published in 2018 and the first adjustments to a SNF’s payments will begin in 2019.

Ultimately, the VBP program should affect providers, beneficiaries and lenders in a positive way. The programs afford health care providers the opportunity to stand out from a quality of care, service and hospitality perspective by making global initiatives to enhance their operations. This methodology forces health care providers to refocus and reconsider their why statement (“why we are here and why are we doing this?”) Hospitals and other health programs were created to care for the sick by those who had a passion for helping others. Effectively implementing a VBP program within a health care organization returns to the original principals that guided the creation of health care in society today.

The changes in the PAMA affect hospitals in a variety of ways. Typically, Medicare sets annual beneficiary payment limits for outpatient therapy services. The PAMA allowed the temporary expansion of the cap on outpatient therapy services provided in Hospital Outpatient Departments (HOPDs) if the therapy is deemed medically necessary. The extension of the therapy cap was permanently extended by the Centers for Medicare & Medicaid Services (CMS) for Critical Access Hospitals (CAHs). From both an operational, beneficiary, and financial perspective, this is key as it drives additional patients to hospitals to supplement Medicare revenue and it allows patients to receive higher quality care for longer time periods through what is likely to be a better therapy program.

Concentrating more on rural hospitals, Section 106 details plans to spend $100 million over 10 years, focusing on extending the Medicare-Dependent Hospital (MDH) program. Established in 1987, the MDH helps support small rural hospitals for which Medicare patients make up a majority of their inpatient days or discharges. To qualify as an MDH, the hospital must be located in a rural area, have 100 beds or less, not be classified as a sole community hospital, and have at least 60% of discharges or inpatient days covered by Medicare. These hospitals are able to receive the inpatient price per service (PPS) rate plus three-quarters of the amount by which their costs per discharge exceed the (PPS) rate. For example: ABC hospital discharges Patient X who had a one night stay. Patient X had a PPS rate of $150. The cost to discharge Patient X is $300. The hospital will receive $262.50. This is determined by taking the difference between the PPS rate and the discharge cost ($300-$150), multiplying it by .75 and adding it to the PPS rate which amounts to $112.50. This boost in rates is invaluable to operators as it helps to bridge the gap between costly discharges and low PPS rates. Additionally, MDH will help decrease expense margins and boost Medicare revenue.

Section 212 has received a lot of attention due to its focus on technology and effect on monetary means of providers. HHS Secretary Sylvia Burwell delayed the adoption of ICD-10 as the standard code for medical data from Oct. 1, 2014 to Oct. 1, 2015. There was significant opposition regarding the delays in implementing the ICD-10 coding system. Many hospitals had incurred substantial financial obligations in implementing ICD-10. This delay ultimately slowed down the transition to value-based payment in the health system. The PAMA, like a lot of legislation, has noble goals but is imperfect. While some sections in the PAMA are steering health care in the direction of realizing a true value-based payment system, some components of the legislation such as the ICD-10 coding have slowed down this process. Overall, however, the trend is clear; health care is moving towards a pay-for-performance model and PAMA represents a significant step in that direction.